Getting it Wrong on the Treasury and the Fed

On September 30, four Harvard scholars presented a new paper[1] about the U.S. Treasury and the Federal Reserve, at an event hosted by the Brookings Institution. The authors contend that the Treasury severely undermined the Fed, which has tried to stimulate the economy by buying long-term securities. While the Fed was working to reduce the remaining maturity of Treasuries in the private sector, the Treasury was extending the length of its debt. The authors want the Fed and Treasury to stop hindering each other and to start cooperating. They also recommend that the Treasury sell more short-term debt to help the economy and promote financial stability.

The paper has the potential to influence Fed and Treasury policy. In particular, the Treasury might be urged to sell less long-term debt in favor of more short-term debt. Because this could reduce the supply of quality long-term assets available to match long-term liabilities, pension fund managers should watch for any changes in Treasury policy.

It is absolutely true that the Treasury’s debt has extended by various measures, and it might be true that this extension tended to buoy interest rates, contrary to the Fed’s efforts. However, the authors did not seem to delve into the causes of the debt’s lengthening. Apparently, they assumed that the portfolio lengthened because the Treasury pumped up its sales of long debt. For example, during the Brookings event, one of the authors stated that “the stock of long-term debt that people had to absorb rose massively.”[2]

This is not what happened. The Treasury persisted in selling mostly short debt and relatively little long debt. The Treasury certainly did not sell so much long debt that it swamped the Fed’s efforts to reduce private holdings of long debt, as the authors suggested.

The author’s apparent misperception of the Treasury debt is surprising. It may have colored their recommendation to shorten the Treasury’s issuance. If they had recognized how short the issuance already is, they might not be so comfortable in urging the Treasury to shorten it further.

To understand how the authors may have gotten off track, it helps to consider the case of the missing bullet holes. During World War II, Allied planes that had returned from missions over Germany were often found to be riddled with holes from bullets and flak. The military could try to protect the planes with added armor, but too much armor would hamper their performance. What would be the optimal amount and placement of the armor? The mathematician Abraham Wald was asked for a recommendation.

Some parts of the planes tended have to more bullet holes per square foot than others. Obviously, the most efficient placement of armor would concentrate on where the most hits were taken.

Wald understood how survivorship bias can mislead by emphasizing what has survived and ignoring what has not. Survivorship bias can skew many kinds of analysis, including financial analysis. If only the mutual funds that still exist are studied, the overall performance of a fund category over time will probably be overstated. The funds that failed must also be considered.[3]

Survivorship bias may have skewed the Brookings paper, which is titled “Debt Management in an Era of Quantitative Easing: What Should the Treasury and the Fed Do?” The paper was presented at a special event hosted by the Hutchins Center on Fiscal and Monetary Policy. Here is a video of the event:

The paper’s premise, as described on the event website, is that

While the Federal Reserve was buying trillions of dollars of long-term U.S. Treasury bonds and taking them out of private investors’ portfolios in its quest to resuscitate the U.S. economy, the debt managers at the U.S. Treasury were moving in the opposite direction by lengthening the average maturity of its bond issuance, putting more long-term Treasury bonds into private investors’ portfolios.

The authors estimated that up to one-third of the stimulative benefit of Quantitative Easing was negated by the Treasury’s long issuance. They argued that by going long, the Treasury had undermined both the economic recovery and financial stability.

The paper’s authors are convinced that the Treasury hindered the Fed by selling too much long-term debt. As a remedy, they proposed a formal process for the two organizations to work out ongoing plans for managing the debt. While I agree that it is important to monitor the consolidated balance sheets of the Fed and the Treasury, some of the panelists at the event argued that the proposed coordination would be impractical at best and dangerous at worst.

Professional investors might be surprised to hear that the Treasury flooded the market with long-term debt. In May, a Bloomberg story warned of a potential shortage in the supply of long-term Treasuries, stating that “Excluding those held by the Federal Reserve, Treasuries due in 10 years or more account for just 5 percent of the $12.1 trillion market for U.S. debt.” The story reported that one bank had estimated that extra demand from pension funds could grow to $300 billion over two years, “almost half the $642 billion [of long Treasury securities] outstanding.”

Let’s compare Treasury and Fed activity in two more ways: bubble charts and distribution charts. Here is the Fed purchase activity, showing each month’s transactions with bubbles that are scaled to transaction size.

The next chart summarizes monthly Fed purchases of Treasury securities. The bubble sizes correspond to the face amounts of the transactions. The Fed purchases were mostly in the 5-10 year and 25-30 year range.

The following chart shows the Treasury’s monthly issuance. It may be hard to see but most of the issuance has been very short, with a median of less than six months. Note that the bubbles are scaled differently than in the Fed chart. 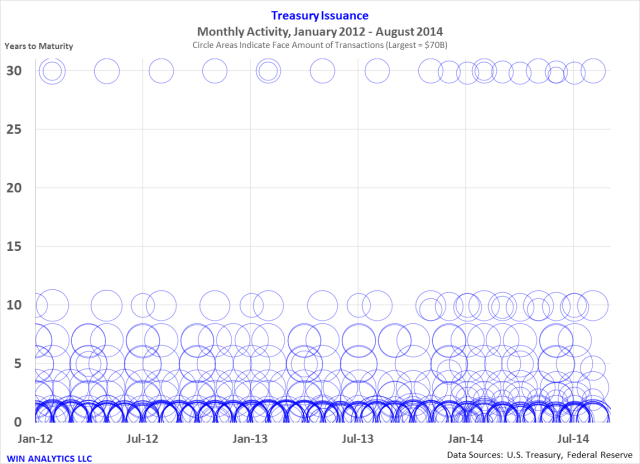 The last bubble chart combines the Fed and Treasury activity with uniform scaling. The Treasury and Fed left very different footprints in the market. 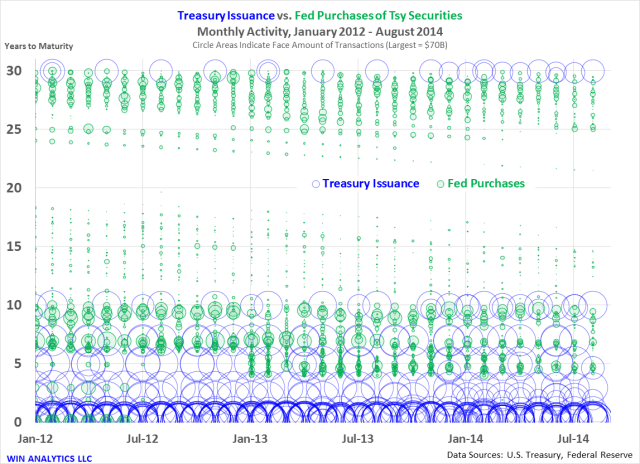 The distribution chart is another way to compare Treasury sales and Fed purchases. The following chart shows cumulative distributions for 2013 activity. The Fed purchased no Treasury securities maturing inside of four years. By contrast, 85% of the Treasury’s issuance was inside four years. The front-loaded character of the Treasury’s issuance is revealed by how much it hugs the upper left corner. The Fed activity was concentrated in the 4-10 and 25-30 year ranges.

What Misled the Authors?

What did the authors misperceive the Treasury’s issuance? The reason is that various measures of the portfolio’s length have been growing since the financial crisis. It seems obvious that a lengthening portfolio must mean that more long bonds are being sold.

Measures of portfolio length include average maturity, average duration, and long-term share. The last of these, the share of the portfolio that is considered long-term, is the simplest. For the authors, “long-term” means a remaining maturity of five years or more.[5]

One of the paper’s dramatic charts shows that the share of long-term debt has grown since the financial crisis. Unfortunately, the authors missed a key reason for this growth.

The answer can be found by considering all changes to the debt in 2013. In addition to $3.7 trillion of new issues, there had been about $2.9 trillion in short securities that matured in 2013, and some securities moved from the long-term to short-term categories. When we combine these effects with the new issuance, we find that the long-term share of the combined changes was boosted to almost 39%, causing the overall long-term share to increase slightly over the year.[7]

Other measures of portfolio length, such as average maturity[8] and average duration, can also tend to increase when a portfolio is front-loaded and runs off quickly. This automatic lengthening masks how short the new securities are.

This is why I told the story about missing bullet holes. The key to our story is the missing Treasury securities. When the debt runs off this quickly, the maturing securities matter a great deal to changes in portfolio length.

Survivorship bias weakens the paper. The authors ignored the securities that matured and assumed that only new securities drive changes in portfolio length.

The possibility that a portfolio can lengthen, even when new issuance is short, has gotten little attention, but it was noted by the committee of bond professionals that advises the Treasury. Buried in their slides presented to the Treasury in early 2013, was this observation:

The authors made a substantial contribution to the discussion of Fed and Treasury policy. Unfortunately, their perspective might have been skewed is undermined by failing to consider the impact of missing bonds. While it is true that the Treasury debt has lengthened, it is not the case that the Treasury overwhelmed the Fed in the longer part of the market. Policymakers should be cautious before taking up any recommendations that are not grounded in practical reality as well as theory.

Note: I revised this post on October 21 after receiving some comments from a friend. I wanted to clarify that the Brookings paper may be correct in its economic analysis of changes in debt length, but that the authors either missed or dismissed just how short the Treasury’s issuance is.

[1] “Debt Management in an Era of Quantitative Easing: What Should the Treasury and the Fed Do?” by Robin Greenwood, Samuel G. Hanson, Joshua S. Rudolph, and Lawrence Summers.

[3] The story of the bullet holes and the discussion of survivorship bias draw on “How not to be Wrong: the Power of Mathematical Thinking” by Jordan Ellenberg, Penguin Press, 2014

[4] “Average Maturity” is shorthand for weighted average remaining maturity, which, for a given point in time, is the average time remaining to maturity for the securities in a portfolio, weighted by their face amounts. The average maturity of the Treasury’s marketable debt is publicized by the Treasury, and it even has its own Bloomberg symbol.

[5] On the other hand, FINRA defines “long-term” as more than ten years.

[6] Amounts are in $trillions and may appear not to add due to rounding.

[7] Alternatively, we could allocate new issuance by its two purposes: the refinancing of old debt and the “new money” to finance current deficits. A straightforward allocation is conceivable in this example: the refinancing preserves the existing balances of short and long debt and the new money makes up the rest of the new issuance. In this approach, the increase in long-term share in 2013 could be explained by “too much” long-term new money. However, reality is more complex than a few buckets of debt. With rigid issuance patterns and noisy outstanding debt, there is no single, indisputable way to allocate new issues between refinancing and new money. Any hypothetical allocation by purpose could be dangerously misleading.

[8] See Is the Treasury Really Going Long? on this blog.

[9] From the TBAC Discussion Charts, February 2013. “WAM” is an abbreviation for “weighted average maturity.”

This site uses Akismet to reduce spam. Learn how your comment data is processed.